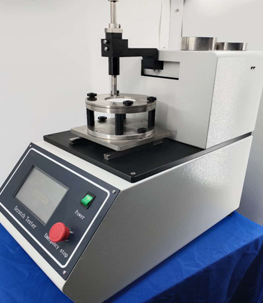 This test method is used to test the resistance of a surface material to damage caused by a scratch.

Zui will evaluate the sensory grade of scratches, the color difference between the scraped and unscraped areas, or the zUI's small scraping force when the sample surface is damaged

3. The instrument is free to install, replace and disassemble the scraping fingers of different specifications, and can carry out uniform one-way straight line scraping movement under different loads.

4. The test process is automatically controlled by embedded system and man-machine interface operation, and precise servo motor and ball screw drive are adopted, which play a decisive role in the control of the scraping speed under relevant standards.

5. Use tungsten carbide as scraping finger to increase the service life of the instrument.

6. Made of aluminum alloy and stainless steel, the appearance is simple, light and corrosion-resistant.

The instrument meets a variety of test standards, and can be customized according to customer requirements of the test platform motion stroke, speed and reciprocating motion cycle.

Scratch test by the hundred lattice method: The purpose of the test is to detect the resistance of paint to scratch shedding.

The ordinary hundred-lattice method is manual testing, and the operation is time-consuming and laborious.

This instrument is driven by two motors to control the length of scratches and the distance between scratches.

When the specified number of lines is crossed, manually rotate the test plate 90 degrees and complete the test after the second stage test.

The instrument can realize grid spacing 2.0mm, meeting the requirements of the standard.

FIG. 1 Detail drawing of the pattern section when the scratch distance is 2mm

6. The cylinder controls the dropping and lifting of the scratch finger

The visual rating method is to place the test sample under the northern sky daylight or the artificial D65 light source, and the test sample is in a horizontal state relative to the evaluator. If necessary, the sample is rotated to obtain the most extreme viewing Angle. For the linear scraping, only 80% of the middle part is evaluated during the evaluation process.

According to the difference of material, the standard on evaluation grade also differs accordingly.

The instrument rating method mainly evaluates the color and luster changes of test samples according to the optical instrument.

Have different measuring method and examining index, for example, according to the ISO 7724 or other similar to standard method, using CIELAB chroma space, in 10 ° observer, D65 lighting light source, including the land surface gloss ingredients, integral ball measuring how a few conditions, measured with se differential gauge test samples after scraping parts and not scratch parts of lightness change the brightness difference delta L *, according to ISO 7724-2 or other similar standard method, using CIELAB chroma space,

B. Changes in luster.

Measure the change of 600 or 200 specular gloss between the scraped and unscraped parts of the test sample in accordance with ISO 2813 or other similar methods.

The company sells our products through distributed distribution partners who provide high-quality products, services and support to our customers all over the world. All the products are in line with international quality standards and specifications, and can perform outstanding and accurate product performance.