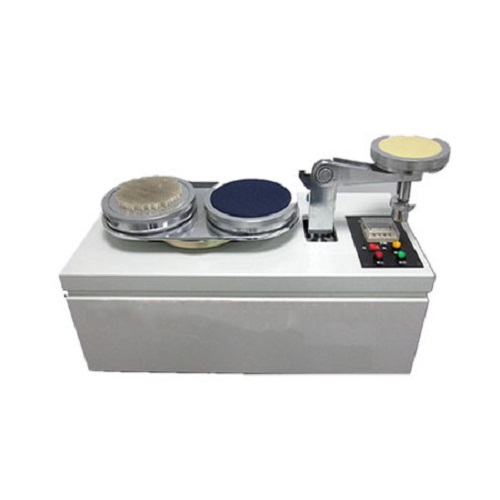 The fatigue tester is a part of the performance test of the buckle. Through a certain number of times, the shear strength and peel strength of the device are measured, and the actual use process is simulated, and the durability is considered.

The ring surface and hook surface of the adhesive belt are fixed on different roller surfaces respectively. In the process of the test, the roller rolls, and the adhesive belt is bonded and peeled continuously. After a certain number of times, it was removed for subsequent test.

The tester meets the following standards:

Brief introduction of the instrument

The whole machine is mainly composed of the following parts, as shown in Figure 1:

1. Counterweight: it is used with driven wheel and the pressure is 5kg.

2. Driving wheel: 160mm in diameter, driven by motor, rotating at 60rpm, reversing every 30s. The ring surface is fixed on the driving wheel.

3. Driven wheel: 162.5mm in diameter, driven by driving wheel. The hook surface is fixed on the driven wheel.

4. Counter: set and display the number of movement cycles.

Taking GB / T 23315 as an example, the test procedure is introduced.

Two groups of samples with length of (540 ± 10) mm and width of no more than the length of groove are cut from one pair of buckle belt. Each group of samples contains a hook face belt and a ring face belt.

Adjust the counter and run the test device to make the sample clutch for 1000 or 3000 times, and then remove the sample.

Take the second group of samples for another test.