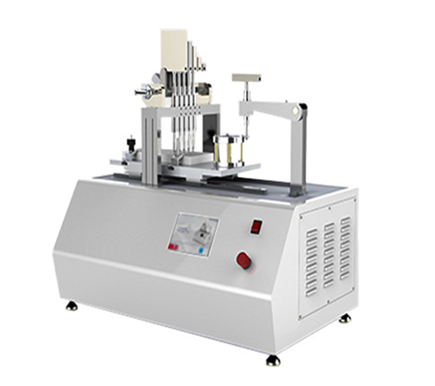 The instrument is suitable for testing the scratch resistance of various automotive interior materials, such as plastic, rubber, leather, fabric, coated materials, non-coated materials and other composite materials.

The abrasion resistance instrument for the smooth and textured plastic decorations in the inside and outside of the car is composed of two parts of the scraping device. The left part can do the five-finger/plastic finger scraping test, and the right part can do the hundred-case method scraping test.

The instrument meets a variety of test standards, and can be customized according to customer requirements of the test platform travel, speed and reciprocating motion cycle.

This test method is used to test the resistance of surface materials to damage caused by scratching.

Zui will evaluate the sensory grade of scratches, the color difference between the scraped and unscraped areas, or the zUI's small scraping force when the sample surface is damaged.

The instrument can be freely installed, replaced and disassembled with different specifications of scraping fingers, which can carry out uniform one-way linear scraping movement under different loads.

The instrument adopts embedded system and man-machine interface operation to automatically control the test process, and adopts precise servo motor and ball screw drive, which plays a decisive role in the accuracy of scraping speed control under relevant standards.

The instrument is made of aluminum alloy and stainless steel with a simple, light and corrosion-resistant appearance.

Based on the automotive industry standard technical requirements and design

The test sample is fixed on a compressed air driven test platform.

The scraper is mounted on a hard bench, and the operator can fix the specified scraper in the balance position through the bracket, so that the sample with irregular width can also be tested.

In addition to material and product development, it also applies to quality control

It's for the plastic assessment.

Five fingers/plastic fingers Scraping test: The specimen on the test platform touches five or one plastic finger and the weight applied above it.

During the test, the test platform moved and the scratch finger left scratches on the surface of the sample.

According to the depth of the scratch to determine the sample scratch resistance performance.

Samples may be plastic sheets, test sheets coated with paints and varnishes, etc.

Scratch test by the hundred lattice method: The purpose of the test is to detect the resistance of paint to scratch shedding.

The ordinary hundred-lattice method is manual testing, and the operation is time-consuming and laborious.

This instrument is driven by two motors to control the length of scratches and the distance between scratches.

When the specified number of lines is crossed, manually rotate the test plate 90 degrees and complete the test after the second stage test.

This instrument can realize delimit interval 2.0 MMM, meeting the requirements of the standard

FIG. 1 Detail drawing of the pattern section when the scratch distance is 2mm

The company sells our products through distributed distribution partners who provide high-quality products, services and support to our customers all over the world. All the products are in line with international quality standards and specifications, and can perform outstanding and accurate product performance.